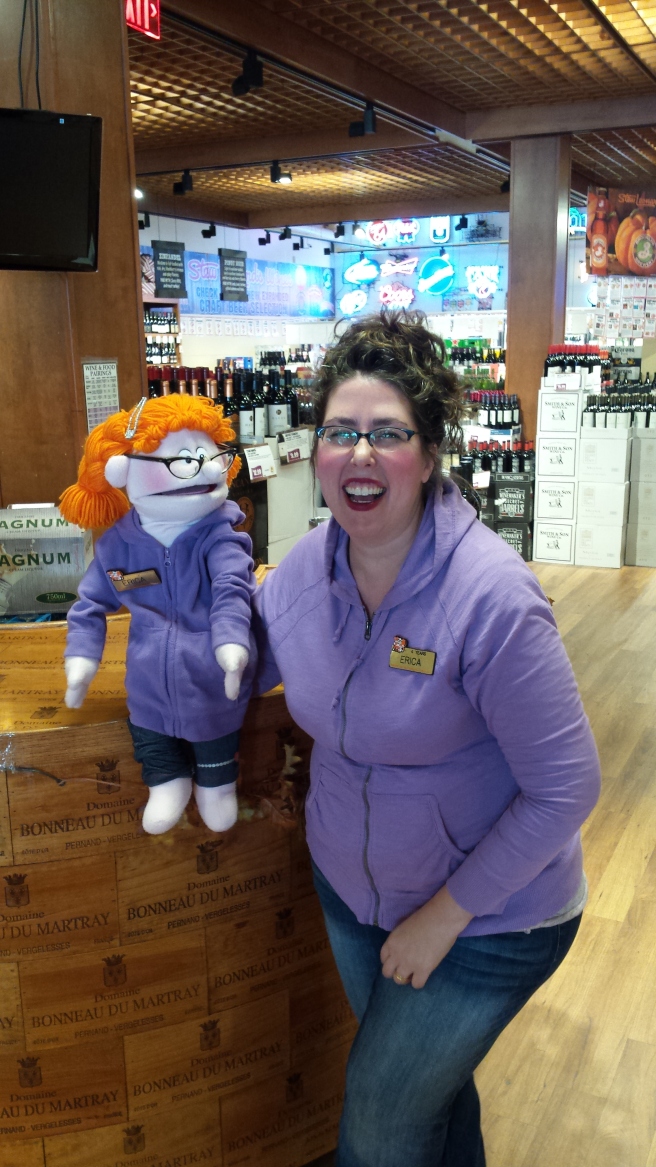 We have a Halloween costume contest at work every year. Thousands of monochromatic, uniformed employees suddenly come to life for a few days. We also get a $25 bonus for every day we dress up. We toss around extremely clever, mostly implausible, and very inappropriate ideas all year round. The brainstorming is brilliant. I enjoy that part the most.

My first Halloween was four months after Noah died. The difficulty of Halloween after losing Noah snuck up on me. Skeletons, gravestones, and those horrible Victorian looking zombie babies. In the early days it was a sucker punch. My mind would go places I didn’t want it to go. I’d wonder what Noah looked like now.

I shoved all of those thoughts to the side and went all out for my first costume at work. I dressed as a drunken 1950’s housewife. I brought in my retro styled Cuisinart blender, my mother’s vintage Better Homes and Gardens cookbooks, and my grandmother’s crocheted poodle bottle cover. I made cardboard curtains and a window backdrop for the tasting bar where I would be most of the day. I wore a pretty A-line floral dress with a green frilly apron. My cat eye glasses, my giant drop pearl earrings. It really wasn’t too much of a departure of what I dressed like normally. I just put it all together into a theme. The theme of appearing all cheery and perfect on the outside but with a secret on the inside. My character’s secret was alcoholism. My secret was a broken heart.

So every year we repeated this cycle. The second year, I had a theme too. I was Mrs. Lovett from Sweeney Todd. I turned my tasting bar into a Meat Pie Shoppe  with powdered donuts oozing raspberry jelly blood. I really just wanted to wear a bustier and do my hair and makeup like Helena Bonham Carter. It was fun but not many got the joke.

Then my costumes got less creative. I just wasn’t feeling it. I guess the desire to be involved in a typically children’s holiday lessened as some emotional numbness started to wear off. It’s amazing really. The numbness lasts for so long. Years. The brain protects while the body just plays along.

Plus there was this girl at work who won three years in a row with stupid store bought costumes. The voter fraud was disheartening. The fun started revolving around what she would be and how she was going to win anyway for barely even trying. We even thought about just dressing up like her.

This year I went back to the theme costume. Mainly for my own amusement. This year I dressed as someone I spend a lot of time with lately. Her name is “My Inner Child” and she’s pretty cool.

Hal got Sister Puppet when Noah was little. We weren’t planning on having another child so we introduced Noah to his “Sister”, a foam doll dressed in a yellow child’s dress with real kid’s sneakers. Her eyelashes have fallen off and her hair ribbons have been replaced over the last six years. But we have a lot of fun with her. Miriam calls her “Sister” and we talk about all sorts of silly things through her. She was one of the few toys that we kept of Noah’s.

So at the very last minute, my work costume came together. I dug through outgrown clothes of Miriam’s and still-fitting clothes of mine until I found a match. Purple sweat jackets and jeans. Sister wore eyeglasses from 3 prescriptions ago and we wore matching barrettes. I pinned an extra ERICA nametag on her and off we went to work.

My Inner Child never thought she would work full-time in a liquor store. She never dreamed she would lose a child. I don’t think she spent much time thinking about the future. She lived in the present like all kids. She played Barbie’s and GI Joe’s in the dirt between houses with her brother and next door neighbor, Jeffrey. She told her mother she thought being a taxi driver sounded like a fun job because you’d get to meet so many different types of people.

“Like never ending stories that just kept coming from the backseat,” Little Me said.

And my Inner Child remembers the way her mother looked at her in that moment. It made her feel like she could do anything. Like she was special and would not lead an ordinary life. And then she went back to reading the Encyclopedia Britannica volumes on the shelf in the 1970’s rec room and learning about each country her Madame Alexander Dolls of the World came from. She would interview them about their traditions and compliment their outfits and hairstyles. She loved to play alone.

So my Inner Child and I trick-or-treated in town today with Hal and Miriam. I held onto Sister Puppet like a security blanket, not even realizing that other little kids were looking at her and waiting for her to speak. To put on a show. So I stuck my hand inside her limp foam body and started to have some fun. She stuck her face in a little boy’s bag of candy as he giggled. She shook her head to make her pigtails flap back and forth. She yelled “Happy Halloween!” with her big pink felt tongue.

Tomorrow the Sister Puppet will come to work again with me. We will be dressed alike. I’ll sit her on the bar or by the cash register, putting a 1.75 liter bottle of Grey Goose up her butt to keep her upright. My “Inner Child” has most certainly kept her sense of humor.

Happy Halloween. It’s fun to be my Inner Child. She has no idea how good she has it.

3 thoughts on “*WWMICD? *What Would My Inner Child Do?”