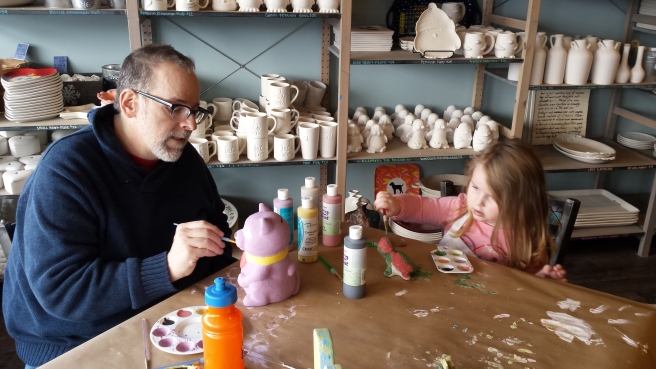 Miriam picked two ceramics to paint. The letter “M” and a sea turtle. Hal chose a Japanese maneki-neko piggie bank. Literally it translates to “beckoning cat” and it’s believed to bring good luck to the owner. There’s a nail salon in town that has one in the window. Miriam has loved seeing that cat, waving one battery operated paw at her, since she was a little baby. It’s like they know each other from a past life. Their connection is so oddly strong.

I’ve always loved theories about luck. Good luck. Bad luck. Before we lost Noah, when life was more normal than I’d realized, I thought alot about how to boost my good luck. I followed all the old wives tales I’d learned from my mother. I’d tested them as a child though.

“No shoes on the bed.” I can clearly remember putting my shoes on the bed to see what would happen. I’d look around my room and wait for something to fall off the wall or a window to break. I thought the bad luck would be immediate. Like a scene out of Carrie. It didn’t occur to me as a child that bad things can happen later.

When we were trying to get pregnant again with who would eventually be the miracle Miriam, we searched for signs that told us we were on the right track. Along with large doses of medical science and good old fashioned sex, we searched for signs. Dragonflies became symbols of hope that Noah was still with us in some way and he was helping. The appearance of cardinals or ladybugs. The name NOAH appearing on keychains, cups, and any souvenirs we’d find at rest stops on one of the drives to nowhere we’d take because we just didn’t know what else to do. These items were a punch in the face and also a blinding bright light. To see his name was to know he’d existed. And also that in some way he was still here. 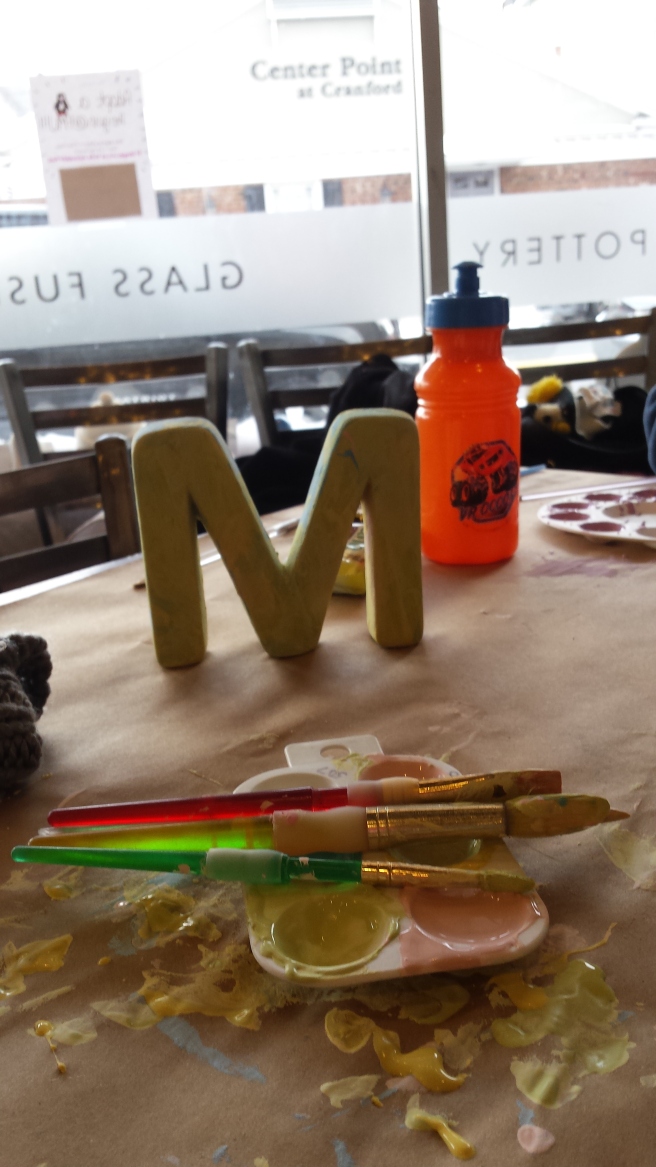 Miriam chose the letter “M” first. She loves the alphabet like me. I hope she has my obsession with font styles one day. The font expresses just as much as the word it spells. Hal was still carefully painting his Good Luck cat so Miriam got to do a second project. She narrowed down her choices to a monkey, a squirrel, a penguin, and a sea turtle. One thing she does do is make a good decision.

“The sea turtle,” she definitively answered.

I stopped myself from starting the “are you suuuuure???” exchange because I knew she was sure. She did not get her decision making skills from me, that’s for sure.

She painted her sea turtle so many colors. Sooo many. She would say things like “I’m making such good art” and “my turtle is so happy.”

I didn’t do a project this time. But as I helped Miriam, I glanced all around thinking about what I will paint when I can come back (alone) to use the rest of our gift certificate to this cool studio. Mugs we have enough of. Figurines are Miriam’s department now. The thing that caught my eye were the dishes and platters with long poems or parts of stories hand written on them and fired glossy and complete. My handwritten words, my imperfect painting, handmade with the colors I choose. This would be what I would do next time. 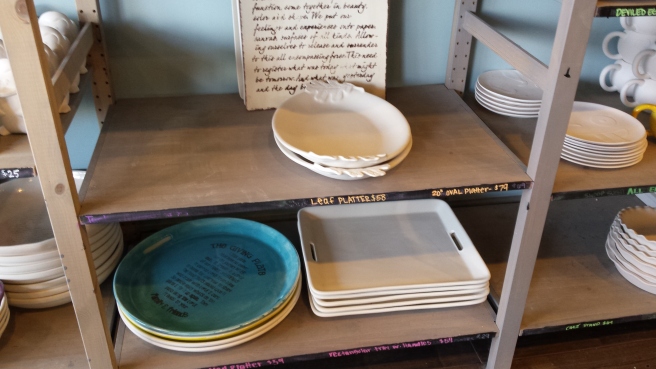 Miriam overcame some fears of getting dirty with her paint stained hands. She concentrated on the task at hand. Painting. Hal shut his hurting mind down for a little while I hope. He just painted this cat for his daughter. I daydreamed  about what I would create. I thought about how we got to this point. The three of us. Painting. Was it luck? Was it good fortune? I think it’s dangerous to think too much about it. Dangerous and distracting. The bad things that have happened and will happen.  The good that has happened and will happen. You’ve got to just “make such good art” like Miriam says. And really try to believe it.